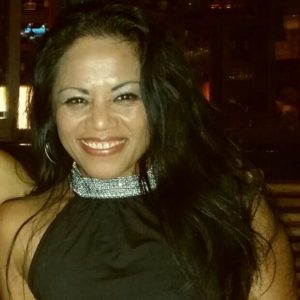 AnaMarie began studying Taekwondo with her family in 2005 under Master Pick at Precision Martial Arts. After achieving the rank of Blue Belt circumstances caused her to drop from classes. After time AnaMarie joined kickboxing class when Ms. Sheila began teaching it at the Estero Recreation Center. Master Hyde’s passion for martial arts and Ms. Sheila’s encouraging words convinced AnaMarie to try TKD class again. Her goal was mostly to get in shape and try and go as far as she can go. Since then her interest and involvement in Taekwondo have truly increased. The history of the martial art, the forms, the Korean language, and sparring class. Taekwondo has changed her vision and lifestyle. She really enjoys being in the class. Her dedication and willingness to keep working towards more learning resulted in her earning her Deputy Black Belt in May 2017. She looks forward to continuing her journey with Taekwondo.

AnaMarie also loves to dance and choreograph dance. She is a member of the Filipino-American Association of SWFL and teaches dance for adults and kids. She took a break from teaching dance to focus on Taekwondo. AnaMarie was a professional dancer in the Philippines and danced on several popular TV shows and traveled in Asia with a performance group.

AnaMarie immigrated from the Philippines to the United States in June of 1988, married her husband David in 1991 and they have two children, Matt & Celeste. While living in the US she learned about America and worked at a few different jobs, finally settling her career in Banking where she has worked for over 20 years. She found out there is so much opportunity in the United States and how lucky she is to have the freedoms of an American. She became a US Naturalized Citizen in 1995. She is very proud as a Filipino-American and coming from a third world country, she continues to be a role model for the rest of the Filipinos who live in the United States and other countries.